What a Dog Trainer Taught me about Children 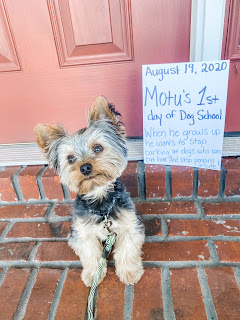 We have an adorable, yet very naughty Yorkshire Terrier.  His name is Motu and is almost 11 months old.  We enrolled Motu in a Doggy Training School course. 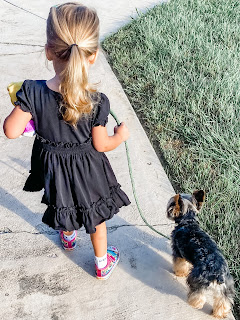 I visited his school last week to see his halfway progress.  The trainer took me to the room and asked me to hold Motu’s leash.  She proceeded to stack a dog kennel and a backpack against the door.  Next, she buckled a pack of treats around her waist.  She was ready to show me what Motu had learned so far.

As soon as he was unleashed, Motu ran around the room sniffing.  To my dismay, he even hiked a leg and peed on the wall.  The trainer didn’t say a word.  She took a stack of paper towels and cleaned the wall.  She waited for Motu to stop running around the room.  When he was calm, she called for him to come to her and she praised him.  She told him to sit and he did.  She told him to lay down, but Motu was too busy sniffing the rug.  She tried a couple more times, but realized that he was too engrossed in smelling the rug.  She rolled up the rug, and now Motu was more focused.  He laid down on command. He even went to his bed when she told him to.  In the middle of the showcase, dogs barked from another room.  Motu ran to the door.  The trainer explained that she had to put the kennel and backpack there to prevent Motu from wiggling under the door crack.

You have read this far and are wondering how this relates to young children, right? 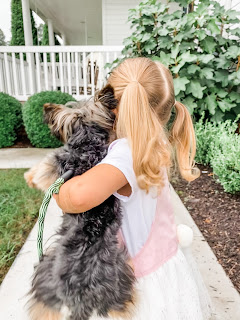 The trainer knew that some of the behaviors Motu was displaying are normal dog behaviors, instinctual even.  It is normal for a dog to sniff and mark their territory.  Motu is not developmentally ready to break those habits, so she ignored them and focused instead on the skills he could learn.  The same is true for toddlers, preschoolers, and kindergarteners.  We need to know what their developmental level is and what we can appropriately expect of them.  In a preschool classroom, we should not expect a 4 year old to sit criss-cross-applesauce to listen to a story.  Is it so wrong if a child lays on his stomach instead?  Are we more concerned about the skills of sitting or the skill of listening to a story?  We need to decide what skills we are wanting to focus on. 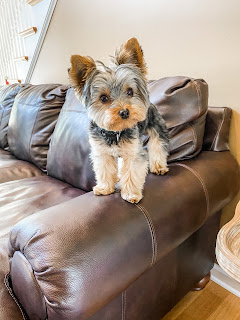 One of my favorite early childhood gurus, Lisa Murphy, says that adults should “control the environment, not the child.”  Motu’s trainer did this.  She barricaded the door, because she knew from past experiences that the large crack caused a distraction. She did not scold Motu when he marked his territory, instead she rolled up the rug so he wouldn’t be as likely to do it again.  In your home or classroom, how does this apply?  We arrange furniture to prevent “run ways” that entice children from running.  We provide calming corners for children who might need to take a break during the day.  We create a visual schedule for nap time, because we know that some children do not know what to expect.  We control the environment, not the child.

So take it from Motu’s trainer: