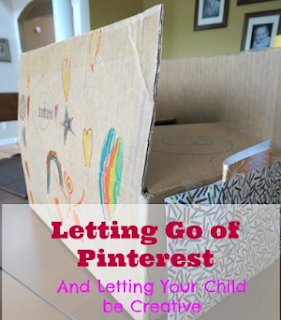 I definitely subscribe to the child-directed, child-initiated learning philosophy. I believe that children are amazing thinkers. I think they display their understanding about the world in many different ways: movement, drawing, singing, dramatic play, construction, writing, etc. Watch this video.

I am quick to climb up on my soapbox when I see children's potential being limited by countless worksheets and standardized tests. I believe that children need ample time to explore, make mistakes, and find their own solutions.

But, I evidently was not generalizing this thinking to all things kid related. I think I fell into the Pinterest trap. Did I secretly get a little excited when the Valentine's Day box letter came home from school?   You bet I did! I may have even created an inspiration board for my kg and second grader.
Kinsley got right to looking on my phone for ideas.  I always enjoy sitting down with her to create her special box. I remember doing the same with my mom. One year as a kid, I made the coolest TV box. On the screen was New Kids on the Block. Hangin' Tough!
Kins decided against the ideas on Pinterest and decided to make a karaoke machine. We covered the shoebox with scrapbook paper, she created a microphone out of a tp roll, and she drew lyrics on the screen.  She still has some finishing touches to put on it, but I think it turned out great. I'll post pics on FB and Instagram this week.

And then there is Zaven, my kindergartner.  My out of the box, middle child.  When I first asked him to start thinking about his box, he became very excited.  That night he went to bed with a notebook and pen to write down his ideas.  A week had passed.  As Kinsley and I were working on her box, Zaven found an empty amazon box.  On his own he grabbed the markers and got to work. 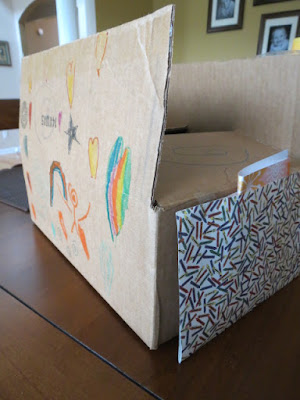 When I saw that he had started without me, I asked if he needed my help.
"Nope, I can handle it," he told me.
"Do you want to cover it in paper like Kinsley did?" I coaxingly asked.
"Nope, I'm just going to draw right on it," he said.

And that he did.  He spent a good hour drawing and designing this box.

If we are being honest, I started to dread him taking this box to school on Wednesday.  I knew his classmates would probably be toting in cute Ninja Turtles, Lego, and robot boxes.  I even tried to remind him of the time we made a train box.  He said that he remembered, but he wanted to do something different this year.

Since I am being transparent, I was afraid this box would be a reflection on who I am as a parent.  I felt the need to write a note to the teacher explaining that I tried to help him.  I made the time.  I had all the necessary supplies.  I even had a Pinterest board ready to go!

But then I stepped back and looked at Zaven's smile as he worked.  I looked at the box once again. 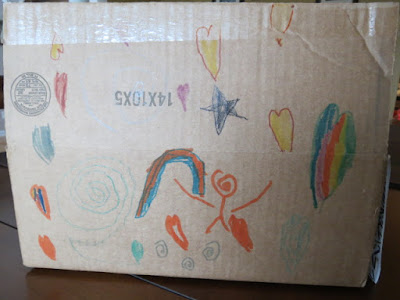 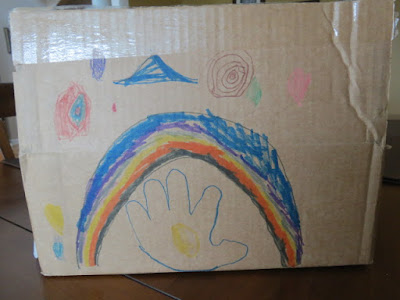 ﻿
At the top of the box, he drew the planets in our solar system.  The squiggles that can be found all over the box are black holes. 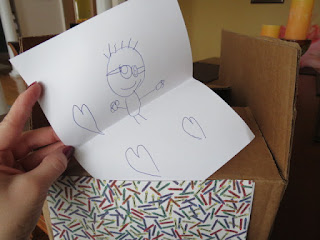 He took some scrapbook paper and tape to create a pocket on the side of the box to keep cards he wanted to give away.  This minion card is for his older cousin, Justus, who he adores and looks up to.

So yes, I have had a change of heart.  This Valentine's Day, I would only hope that Zaven's box is a  reflection on me as a parent.  But truth be told, it isn't.  This is all Zaven.  He is a creative, problem-solver.  He loves learning about science and history. He likes to make pictures for other people.  He has a great memory when it comes to things we have done as a family.  And his Valentine's box is the best one yet!