Look at one-year-old Brickston! I wanted to share an activity that will help you build language skills with the baby or toddler in your life. 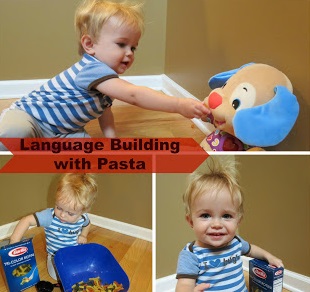 Often times, play activities are derived out of necessity in my house. I needed to occupy Brickston for just a bit as I finished grading a paper.  I opened my pantry and saw the box of pasta.  It has been mocking me for weeks now.  My husband and I are trying very hard to stick to the Whole 30 diet once again, which means pasta is out!  So instead of letting the tri-color noodles go to waste, I had an idea. 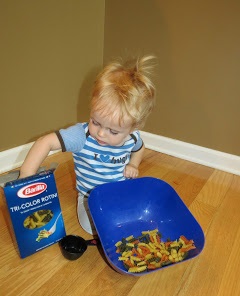 I grabbed a large plastic bowl and a few measuring cups.  I sat Brickston on the hard floor (easier to clean up) and opened the box.  I watched him carefully pull a noodle out of the box.  He turned it over in his hand and looked to me for permission.  I poured some of the pasta into the bowl.  He stirred it using the measuring cups. I grabbed a few stuffed animals and modeled how to "feed" them.  I then grabbed my camera and took the video that is posted at the end. 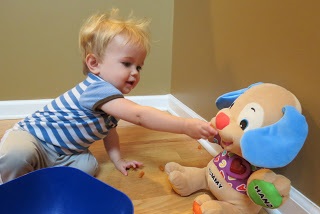 The pasta provided great sensory exploration.  He buried the cups in the bowl of pasta and dug them back out.  He practiced cause and effect as he tipped the box over and watched the pasta tumble out onto the ground.  But best of all, the pasta play gave us an opportunity to build communication skills.

No, Brickston isn't yet talking beyond the occasional "Mama" or "Dada," but he communicates.  He communicates by pointing, whimpering , and going "boneless" (in protest of something he doesn't want).
He is also demonstrating the ability to maintain joint attention.  Joint attention typically begins to develop around 6-9 months of age. It is a very important communication skill.  Joint attention is when a child and an adult pay attention to the same thing.  They are sharing attention that is focused on the same activity or object.  The development of joint attention means that the individual understands that other people have intentions and ideas, too. 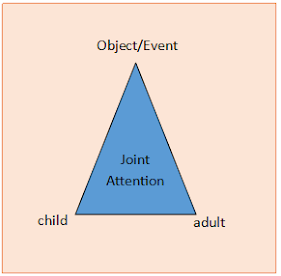 Joint attention is needed for later conversational skills.  During play, Brickston looks at me often.  He is checking to see if I am attending and if I have anything to add.  These opportune glances are prime opportunities to build language.
Babies and toddler's brains are developing rapidly.  This is the prime time to build language and communication skills.  This may seem like a hefty task, but you are probably already doing these things everyday.
I want this post to be a reminder that you are a powerful force in your child's development.  An easy way to build your child's language is to comment or narrate what they are doing.  You can label the objects your child is using.  Describe the object by talking about its size, color, and texture. You can also label your child's actions.
Sometimes it is fun to have "messy" play that is easy to sweep up.  Definitely watch your child closely, because the pasta could pose a choking risk.  If your child tries to put it in his/her mouth, you could use cheerios instead.  After we played together, I sat on the floor with my laptop to finish grading the paper.  Brickston continued to play for 10 more minutes with the pasta! 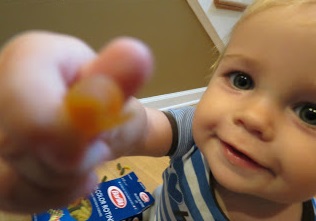 How are you playing with language today?