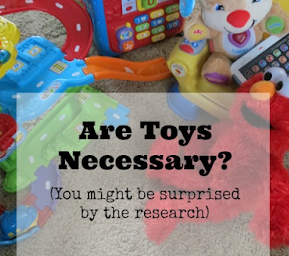 I will be the first to admit it. My house is being over run with electronic, noisy toys. After Christmas and Brickston's first birthday, I've come to the conclusion that the toys are multiplying like Gremlins while we sleep.

My family loves to buy presents. My mom, sister, mother-in-law, and grandmother are all guilty. I'm just as much at fault. I have saved many of the toys from when Kinsley and Zaven were babies, too. This means our toy situation is growing exponentially. On a semi-related note, have you ever noticed how the batteries in the most obnoxiously loud toys will last FOREVER? Seriously, I have toys from Kinsley(she's 8 years old) that we have NEVER replaced the batteries, and they are still going strong. But my remote control, forget it. It's a conspiracy.

So aside from the toys adding to the clutter in my house, why am I reevaluating our possession of them? A couple of weeks ago, my academic advisor shared an article highlighting the research on the effect of electronic "educational" toys. You can read the article here.
The article discusses Sosa's  (2015) study which found that toys that produce lights, sounds, and words actually decreased the quantity and quality of infants' language behaviors. This seems almost counterintuitive. Why would we buy our kids toys that talk and sing only to have their ability to talk and sing limited? But many of us fall into the trap. The toy manufacturers suggest the toys as a way to build skills.  For example the puppy in the above picture claims to:
(Retrieved from Fisher-Price website.)

The Importance
While this advertising is enticing, the research done by Sosa and colleagues demonstrates that these claims are much too lofty.  In their study, 26 infants were paired with a parent.  During the study, a series of communication behaviors were documented: children's vocalizations, verbal back-and-forth conversational turns, and parent's use of words (which are all important language facilitation behaviors). These behaviors were documented when children were given electronic toys, wooden traditional toys, and board books.  Researchers found that the most language facilitating behaviors occurred during children's interaction with board books.  The least number of parent words, children's vocalizations, and conversational turns took place during children's interaction with electronic toys.  The researchers warn, "Play with electronic toys is associated with decreased quantity and quality of language input compared with play with books or traditional toys," (Sosa, 2015, abstract).

Mini Experiment
This research definitely made sense to me as I read it, but I was still feeling the love for some of the toys.  I wondered how often Brickston (14 months) independently chose to play with these electronic toys.  In my quick little experiment, I recorded a day in the life of Brick. I found that he did not choose the electronic toys.  Here is our day: 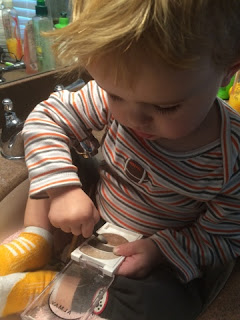 First, Brickston played with my eye shadow while I was getting ready in the morning. I labeled the different parts of his face as he applied the shadow.  "You put it on your nose!" 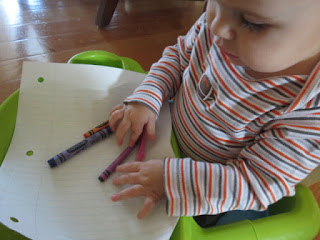 He colored with crayons while I edited my literature review. Periodically, I would talk about the color he chose or what type of line he drew. "Brick, you made a long, blue line." 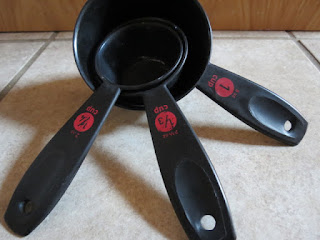 During breakfast, Brickston stacked the measuring cups.  He filled them with cereal and poured them onto his plate.  "Can you pour more?" 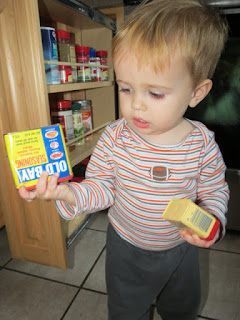 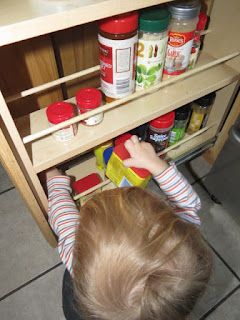 While I cooked lunch, Brickston took out the spices from the cabinet and rearranged.  He pretended to pour them into the measuring cups.  He gave them to me to smell, so I would "sneeze." 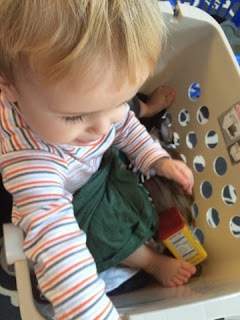 While I folded laundry, Brickston sat in the basket and handed me socks.  We talked about whose they were and the colors. 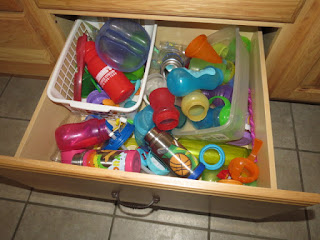 Don't judge me by this photograph.  My sippy cup was organized at one time, but then my little guy became mobile.  During dinner, Brickston played in the cup drawer.  He tried to match lids.  He would bring a cup to his sister and she would pretend to drink. 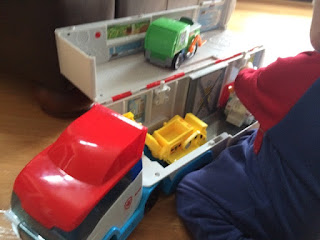 That evening, Brickston did play with a toy.  It just so happens that it wasn't even his own toy.  Over the past few days, he has really gravitated toward playing with his older brother's Paw Patrol trucks and dogs.  Ironically, it does not make any sounds nor does it light up...just needs good old imagination.

Routine Based Play
Reflecting on our day, it is obvious that electronic toys are not a necessity.  Most of Brickston's day revolves around routines (just like all infants).  Certain things need to happen everyday: chores, mealtimes, etc. These daily events provide opportunities to practice those communication facilitation skills (vocalizations, turn taking, labeling, gestures, etc).  Routines allow for children to learn new skills because they are functional, predictable, and occur often.

What is the major take-away?
As parents, we need to be use caution when giving our children electronic toys.  V-tech and Fisher Price cannot come close to comparing to the rich language opportunities a parent can give.  There is no substitute for talking and playing with your child.  Simple books and traditional toys may afford for more language opportunities between a child and caregiver.  Electronic toys are not inherently bad, but adults must be sure to use them with the limitations in mind.

It is okay if your toy box or play room contains some of these electronic toys, but the majority of the items should be books and open-ended toys and materials.

What are your thoughts on children's toys?

If you are a research junkie like me, check out these studies:

“Association of the Type of Toy Used During Play With the Quantity and Quality of Parent-Infant Communication” by Anna V. Sosa, PhD in JAMA Pediatrics. Published online December 23 2015 doi:10.1001/jamapediatrics.2015.3753