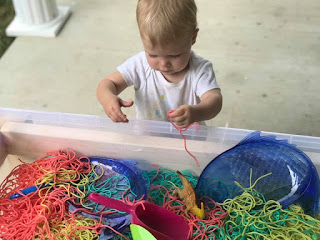 Rainbow colored spaghetti is one of my favorite invitations at our play groups. It is such a versatile material.  You can put it in the sensory table, in a kiddie pool, or anywhere you please!  The kids don't get too messy, but your porch or floor might!

At my youngest daughter's birthday party celebration, I had several questions about how to make the colored spaghetti.  So here it is! 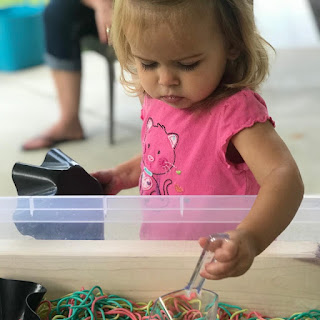 I am almost embarrassed to share this tutorial, because it is so easy to do!  I have actually tried several methods that I have found on pinterest: using vinegar, using rubbing alcohol, dying the spaghetti after cooking it, etc.  Some of these tries were failures. I have had mishaps in the kitchen.  My hands have gotten stained.  The spaghetti was too brittle and sometimes too oily.  Let me save you the headache, and fill you in on the best way to do it!

I came up with this no-fail method that has worked perfectly. 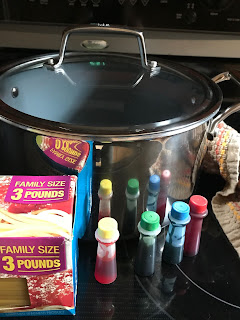 If you are filling a larger area, you will need MORE spaghetti :) 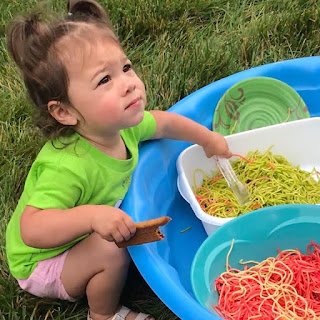 2. Evenly divide your uncooked spaghetti according to the number of colors you want to make. If you want to make red, blue, and yellow spaghetti; you will need to separate it into three groups.

3. Fill your large soup pot with water.  As it begins to boil, put 3-5 drops of red food coloring into the water.  Let the dye distribute. Then stir in your spaghetti.

4. Boil the spaghetti for 2 minutes less than the instructed time.  For example, my box says to cook the noodles for 10-11 minutes.  For colored spaghetti, I would only boil the noodles for 8 minutes. This keeps the noodles from turning to mush as the children play with them.

5. Drain the water and noodles into a strainer over the sink.  Be careful, that dyed water can splash onto things that you do not want to be dyed (speaking from experience).  Run cold water over the noodles for a couple of minutes.  This will keep the noodles from sticking together.

6.  Spread the red spaghetti onto a cookie sheet.  Let this sit there for 45 minutes to cool.  This will allow the color to set into the noodles.  When your children play with it later, the dye should stay on the noodles and not on their hands.

7. Put 2-3 drops of olive oil on your hands and work it through the cooled spaghetti.  Then put into a plastic ziplock bag and store in the refrigerator until you are ready to play.

8. Repeat the process with each of the other colors.  Be sure to rinse your pot before making a new batch, unless you are interested in color mixing :)

Because this recipe does not use rubbing alcohol, it is taste-safe.
My cat has eaten a large portion and is still around to talk about it :) 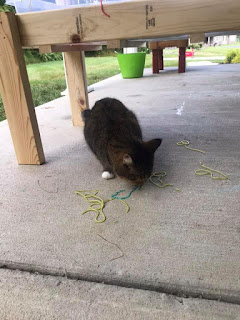 If you would rather skip out on the mess, we have several Friday Play Group Sessions coming up!  Email branchandblossomatelier@gmail.com to register.  We would love to spend the morning with you!